In 2009, curator Freek Lomme invited designer Alice Schwab and artist Sara Bomans to collaborate on a networking project during the Dutch Design Week at Your Space (Van Abbe Museum, Eindhoven, NL). Alice and Sara came up with ‘comment-like-share’, a materialisation of the (at that time relatively young) social network facebook.

Visitors were invited to take part in a discussion about the value and possibilities of virtual networks like facebook. Then they were asked to create a group on the wall using the word that defines them the best. Depending on how many people they expect would belong to their group, they could use a small, medium or big adhesive circle. Once their name was written inside their group, they could connect themselves with others on the wall using coloured tape. Each colour represented a different way of being connected. Starting on an empty wall they gradually visualized the (social) network that exists between the various visitors of the exhibition.

Freek Lomme about comment-like-share: "With limited profiles, visitors could show their connection with others that visited the expo. Like social mapping of that precise week, comment-like-share became a report about friends and their connections, the profile of invisible and hidden links. A growing wall, created by the user and inviting privacy to share. The wall transgressed the border between the secret world only visible for social network users, on the one hand, and the outsiders, living in reality only, on the other. The artists invited random strangers to an open, living artwork, conversations, discussions, creation and reflection." 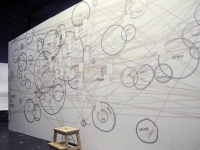 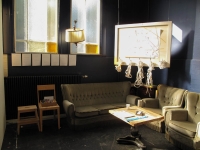 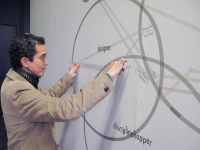 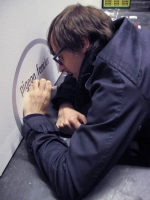 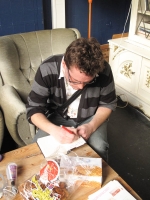 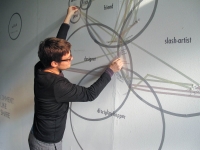 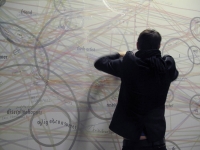 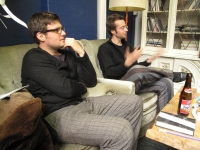 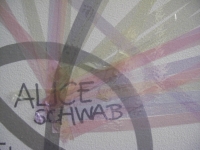 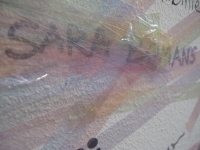 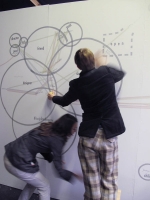